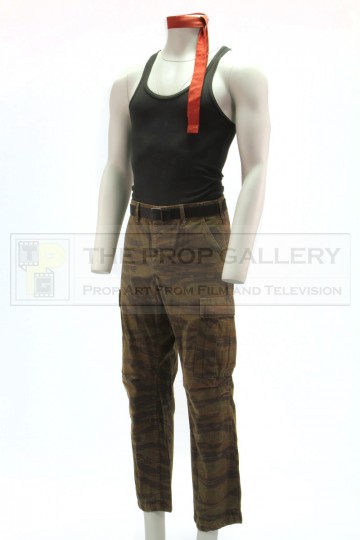 This costume can be seen worn by Charlie Sheen as Topper Harley for the majority of the movie and is a homage to the one worn by Sylvester Stallone as John Rambo in First Blood. The costume consists of a black cotton sleeveless vest with makers label removed by the production, camouflage military style combat trousers accompanied by a belt and the signature red headband, the trousers are hand inscribed to the interior waistband with the initials 'C.S' and can be matched to the ones worn on screen by Charlie Sheen in various scenes on the movie by the distinctive camouflage pattern.

The costume remains in excellent screen used condition with only minor wear from use during the production, overall very fine.

An incredibly rare example of principal character costume from this popular parody.