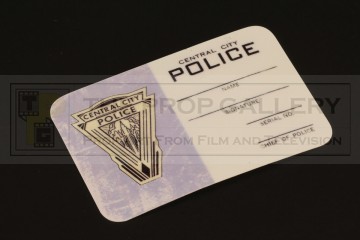 An original badge from the production of The Flash, the 1990 superhero television series based on the DC Comics character starring John Wesley Shipp.

This badge was created by the production for use by various characters, this unused example is constructed from laminated card and features the Central City Police shield to the left side with spaces for the owners name and signature to the right, to the verso are various spaces for further information including a fingerprint.

The identification card measures approximately 3.5" x 2.5" and remains in good unused condition with some colour fade to the front, otherwise fine.