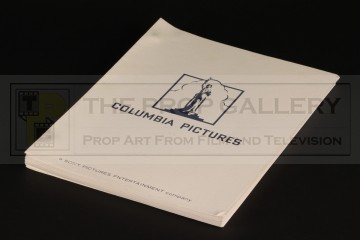 An original script used in the production of Spider-Man, the 2002 superhero picture starring Tobey Maguire, Willem Dafoe and Kirsten Dunst.

This original production used script is dated April 14, 2000 and comprises of 120 pages bound within front and rear covers of textured white card with the front featuring the Columbia Pictures logo. This represents writer David Koepp's first draft screenplay which features both the Green Goblin and Doctor Octopus as antagonists, director Sam Raimi considered the relationship between the principal characters to be more important and felt that the addition of a secondary antagonist would make the film too complex. This resulted in a script rewrite by Scott Rosenberg where Doctor Octopus was dropped from the picture entirely and would later become the antagonist of Raimi's 2004 sequel, this of course meaning that parts of this first draft script bear notable differences to the finished movie.

The script remains in excellent condition throughout with some minor edge and cover wear, the spine hand inscribed 'SPIDER-MAN' with the date in black marker pen.