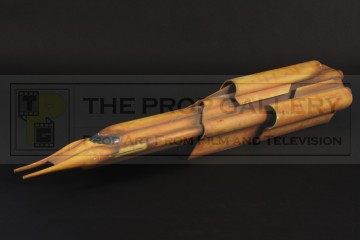 An original filming miniature used in the production of the long running BBC science fiction television series Doctor Who.

This spaceship filming miniature was created for the uncompleted and unaired serial Shada starring Tom Baker as The Doctor which was intended to be broadcast in 1980, it was later released on VHS in 1992 with narration by Tom Baker and the addition of new effects shots produced by Ace Editing.

The miniatures for Skagra's spaceship were visioned by BBC Visual Effects Department designer Dave Havard and built in three scales with this being hero large scale version constructed by effects assistant Stuart Brisdon. The miniature is constructed from wood and plastic to an extremely high standard and features a perspex cockpit canopy with a weathered yellow paint finish, the side panel can be removed and it was from these concealed pins that the model was rigged for bluescreen photography.

This miniature is offered for sale here for the first time from the private collection of assistant K-9 operator and author Steve Cambden and can be seen photographed on the front cover of his book The Doctor's Effects. The final photograph presented here shows this exact miniature behind the scenes at BBC Television Centre during the visual effects shoot in 1979, this was taken in studio by Cambden and is reproduced here with his kind permission.

The miniature measures a spectacular 30" in length and remains in excellent condition exhibiting some minor paint wear with vintage repair present to side of front nose, lacking two minor pieces of detailing from the front wings and one small kit part to the bottom, in generally fine vintage original and screen used condition.

This represents an incredibly rare example of an original filming miniature and an exceptionally artefact from this classic science fiction series.