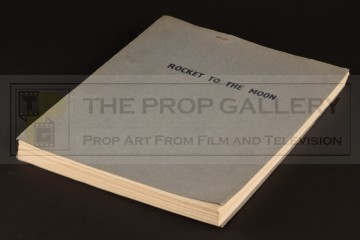 Jules Verne's Rocket to the Moon

An original script used in the production of Jules Verne's Rocket to the Moon, the 1967 science fiction picture directed by Don Sharp also known as Those Fantastic Flying Fools.

This original production used script is dated 5 Sept, 1966 and comprises of 128 pages in addition to a cover page and cast list bound within front and rear covers of textured blue card with the movie title 'ROCKET TO THE MOON' embossed to the front. The two page cast list at the front of the script gives the character name, a brief summary of their character and the name of the actor or actress portraying them, in the case of Angelica and Henri no performer is listed presumably as Hermione Gingold and Edward de Souza had not been cast when the script went to print.

The script remains in excellent production used condition with only minor wear from handling and minor rusting to the binding plate, extremely fine.