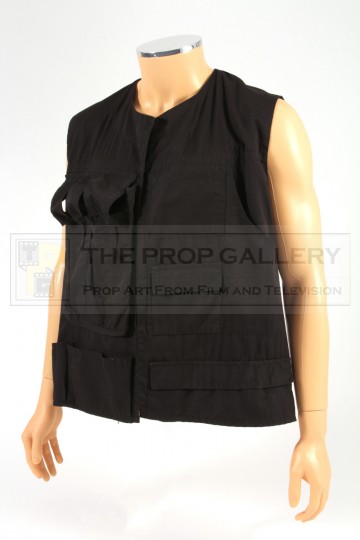 An original costume used in the production of picture Star Wars, the 1977 science fiction picture and first instalment in the classic franchise directed by George Lucas.

Vests such as this can be seen worn by the troopers of the Rebel Alliance in various scenes of the movie notably during the opening battle sequence aboard the Tantive IV and in the climactic ceremonial sequence.

Visioned by Academy Award winning costume designer John Mollo the vest was created for the production by A.E. Bickel & Co for leading industry tailors Bermans and Nathans. Constructed from a black polyester and cotton fabric the garment features a number of pockets and pouches to the chest and bottom with a label to the interior collar.

The vest is size medium and remains in excellent production used condition with some fading to the label, extremely fine.

An incredibly rare example of original wardrobe from the first instalment of this classic franchise which remains one of the most influential in cinematic history.