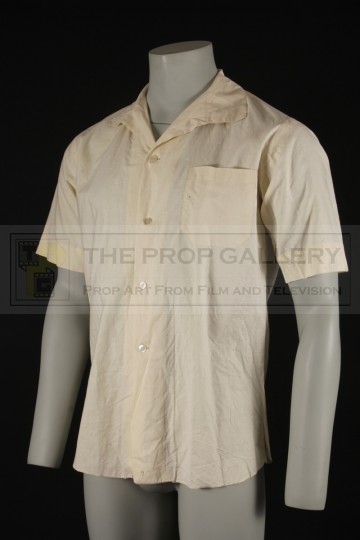 An original costume used in the production of The Sand Pebbles, the 1966 war epic starring Steve McQueen and Richard Attenborough under the direction of Robert Wise.

This shirt was worn by Hollywood legend and pop culture icon Steve McQueen as Jake Holman of the U.S Navy. The cream shirt was bespoke made for McQueen by leading theatrical tailors Western Costume and retains original label to the interior seam which is type written '2402-2, Steve McQueen', this partially trimmed and stitched around the seam. This style of short sleeved shirt featuring a chest pocket can be seen worn by McQueen during shore leave.

The wardrobe remains in excellent vintage condition exhibiting some wear and minimal soiling consistent with use during the production, generally fine.

A fine example of original wardrobe from this highly regarded Academy Award nominated production worn by The King of Cool himself.