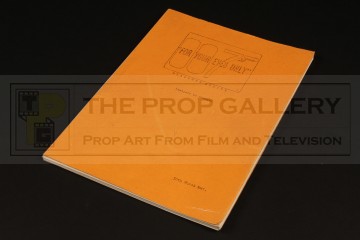 James Bond: For Your Eyes Only

An original script used in the production of the 1981 James Bond movie For Your Eyes Only starring Roger Moore as the suave spy.

This is an original dialogue script used in post production for editing and subtitling purposes. The script is dated 30th March 1981 and comprises of 54 pages bound within front and rear covers of orange card with the front featuring a large printed 007 logo and the name of the movie 'FOR YOUR EYES ONLY' across the centre.

A rare example of original production material from one of the most celebrated franchises in cinematic history.