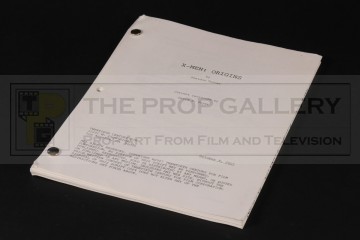 An original screenplay from the production of X-Men Origins: Magneto, a proposed and later cancelled prequel to the X-Men film series with David S. Goyer attached as director.

This is the original screenplay written by Sheldon Turner which features revisions by David S. Goyer and although the picture remained unproduced some aspects of this script were later incorporated in to X-Men: First Class (2011) with Turner even receiving a story credit. The screenplay is dated October 8, 2007 and comprises of 107 pages each headed 'X-MEN: ORIGINS/MAGENTO', large amounts of highlighter pen present throughout and 'ORIGINS COMPARISON DRAFT' hand inscribed to the leading edge possibly indicate this script was used during rewrites.

The script remains in generally excellent condition with some edge wear from use and handling, overall fine.

A very rare artefact from this popular superhero franchise.