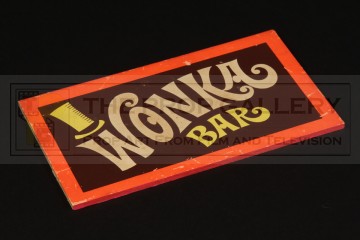 An original prop used in the production of Willy Wonka & the Chocolate Factory, the 1971 picture starring Gene Wilder under the direction of Mel Stuart.

This original screen used prop Wonka bar is one of a number custom made by the production, despite the relatively high number created remarkably few survive today as the majority were trashed after filming wrapped with just a precious few being retained as mementos by cast and crew members. Constructed from highly compressed card stock which is comparable to balsa the colourful prop features the iconic Wonka logo to the front, plain brown to the verso with the top and bottom edges finished in fluorescent pink paint, this detail being clearly visible on screen.

An iconic, instantly recognisable and highly displayable artefact from this highly regarded classic which requires no introduction.