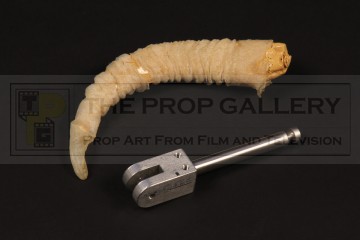 A set of original puppet parts used in the production of Willow, the 1988 fantasy picture starring Warwick Davis and Val Kilmer under the direction of Ron Howard.

These parts were created at Industrial Light & Magic during the production of the visual effects work for the pioneering morphing sequence which sees Willow (Warwick Davis) restore Fin Raziel (Patricia Hayes) from a goat to her human form. The sequence proved extremely difficult to achieve as various seamless transformations were required between the creatures which included a goat, ostrich, turtle and tiger. Several traditional methods were considered for the sequence including stop motion animation and optical tricks but with visual effects supervisors Dennis Muren, Phil Tippett and Michael McAlister keen to produce a truly revolutionary effect a new and groundbreaking approach was adopted. Ultimately puppets were created which could be operated and photographed against bluescreen with the background being digitally extracted and inputted to a software program developed by Doug Smythe which was able to process the images and morph them seamlessly in to continuous footage. This breakthrough in computer generated imagery would prove to be instrumental in the widespread use of CGI for special effects and saw Dennis Muren, Michael McAlister and Phil Tippett nominated for the Academy Award for Best Visual Effects.

This goat horn was created at Industrial Light & Magic during the production for use on the armatured puppet designed by Tad Krzanowski and comprises of a textured latex skin, this was likely intended to be used for the shot where the goat head collapses and forms the ostrich head which was achieved by drawing the air out of the puppet with vacuum hoses. This horn skin is presented on a production cast horn of resin and accompanied by a metal armature section which was also created during production for use on the armature puppet.

The horn remains in good vintage condition in two pieces exhibiting some small holes due to age and handling however is not deteriorating, the resin horn and metal armature section remain in near perfect original condition, each measure approximately 5" and 3.5" respectively.

A fine example of original material from the groundbreaking morphing sequence of this fantasy classic.