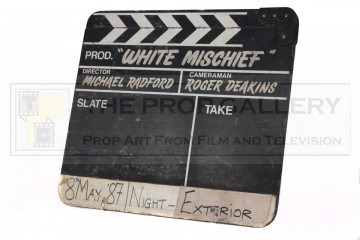 An original clapperboard used in the production of White Mischief, the 1987 picture directed by Michael Radford.

This production used traditional style black wooden clapperboard with hinged clap stick bears the movie title in white lettering in addition to the names of director Michael Radford and highly regarded Academy Award winning cinematographer Roger Deakins. The clapperboard has spaces where the slate number, take number and date could be marked for reference and features applied tape which is hand inscribed with the date from its final use during the production.

The clapperboard measures approximately 15" x 14" and remains in very good vintage condition exhibiting wear from extensive use during filming with signs of chalk and tape residue, notably to the verso.

A fine example of the iconic clapperboard which clearly saw heavy use during the production.