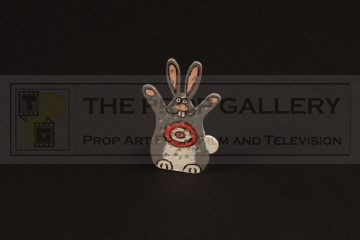 Wallace & Gromit: The Curse of the Were-Rabbit

An original target used in the production of Wallace and Gromit: The Curse of the Were-Rabbit, the 2005 stop-motion picture produced Aardman Animation and Dreamworks.

Rabbit shooting targets such as this can be seen used in the fairground sequence, constructed from plywood the target is hand painted and extremely detailed with slight indentations having been made to the wood and painted silver to simulate pellet hits. The target stands approximately 2.5" high and remains in excellent production used condition with evidence of Blu-Tack to the verso which was possibly used to secure it to the miniature set.

A rare and highly displayable artefact from this celebrated production which won the Academy Award for Best Animated Feature.