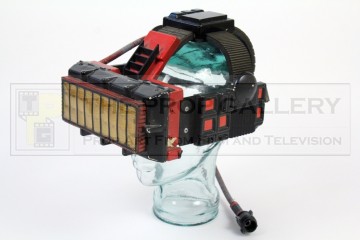 VR headset - Gunmen of the Apocalypse

These virtual reality headsets were worn on screen in the series VI favourite Gunmen of the Apocalypse as the crew find themselves in a computer simulation of the wild west doing battle with The Four Horsemen of the Apocalypse with each of them playing a character from the game with special skills. The episode went on to win an International Emmy.

This headset was built by Mike Tucker and Nick Kool of the BBC Visual Effects Department, constructed largely in plastic with foam and rubber details the headset features a hinged front section which can be lifted up and is wired to light with bulbs hidden inside the visor. The wire is concealed in a plastic tube with a connector at the end which would have been joined to a power pack to use the light up feature for filming. This light up feature remains in working order to this day having been tested by connecting to a 9V battery. The helmet features a clasp to the rear which is inscribed 'Robert/Danny' for use by Robert Llewellyn as Kryten and Danny John-Jules as Cat.

The VR headset remains in excellent screen used condition with some very minor paint loss to the plastic in areas where it has failed to adhere properly, the polystyrene which was stuck inside to add some comfort for the wearer is largely missing with only a little remaining to the inside. The prop measures approximately 12" deep and 10" wide.

A testament to the level of talent within the BBC Visual Effects Department the prop makes an incredible display spectacle from a highly regarded episode of this cult television series.