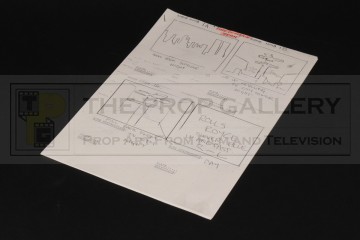 These storyboards are copies of the original renderings issued to and used by assistant director Derek Whitehurst during the production of the episode Play it Again, Sram. The storyboard sequence consists of six pages with each containing four images relating to special effects shots which contain instructions below. The sequence is bound by a staple to the top left corner with the episode title highlighted to the top.

A fine example of original production material from this classic Anderson series.