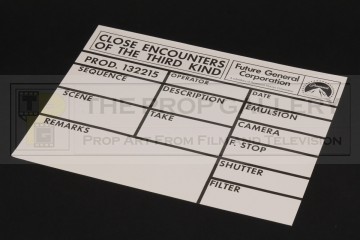 Close Encounters of the Third Kind

An original slate from the production of Close Encounters of the Third Kind, the 1977 science fiction classic directed by Steven Spielberg.

This camera slate was created by the production as an alternative to the more traditional clapperboard, these were to be used primarily during the production of visual effects sequences and identical examples can be seen in various behind the scenes photographs. Printed on the white paper the slate features the title of the movie with the Paramount logo to the top and space where the user could record various information such as the sequence, scene and take numbers in addition to more technical information.

An affordable example of original production material from this critically acclaimed Academy Award winning blockbuster which will forever remain a classic of the science fiction genre.