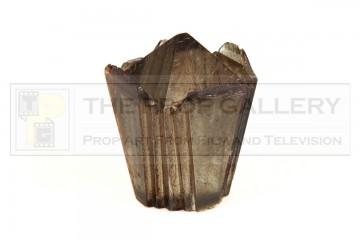 This is an original communications crystal as used by Mark Strickson as Vislor Turlough throughout The Black Guardian trilogy comprising of the 1983 serials Mawdryn Undead, Terminus and Enlightenment. Such crystals are seen used at various points throughout these serials and represent a central plot device as the Black Guardian (Valentine Dyall) conspires to kill The Doctor (Peter Davison).

Constructed from moulded resin the prop was created by the BBC Visual Effects Department and does not feature the small hollow to the underside for a light which could be rigged for the shots where the crystal was required to glow as with other examples, instead this crystal was blackened with paint and is specifically the one created for and seen on screen in the climactic scene of Enlightenment as the Black Guardian vanishes in flames with the aforementioned feature not being required.

The crystal stands approximately 2.5" high and remains in good production used condition with some chipping to the top, understandable given that Strickson throws it on screen.