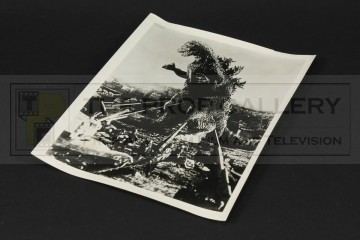 Godzilla, King of the Monsters!

A vintage original still from the production of Godzilla, King of the Monsters!, the 1956 American first release of the 1954 kaiju classic directed by Ishiro Honda.

This vintage original black and white still is printed on glossy photographic paper and features one of the iconic publicity shots of Godzilla rampaging through the city. To the verso the still retains its original large paper snipe tipped to the centre which features a lengthy story outline with 'EROS FILMS LIMITED PRESENTS' to the top who were responsible for bringing the picture to British theatres, to the bottom it reads 'GODZILLA - KING OF THE MONSTERS OPENS AT THE LONDON PAVILLION DECEMBER 14TH 1956'. Although this is an American still it was clearly utilised for the British first release in late 1956 with the snipe being created for this purpose by Eros Films, the snipe is additionally hand inscribed '27A' in purple and features the stamp of a collector called Joseph Young who once owned the still.

The still measures 10" x 8" and remains in good vintage condition, untrimmed with no paper loss it exhibits some minor edge wear from age and handling with some edge curl, image area remains fine.

An extremely rare still with excellent imagery from the birth of this classic film series.