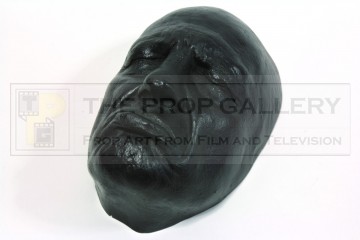 An original prop used in the production of Ghostbusters II, the 1989 supernatural comedy directed by Ivan Rietman.

This lifecast was created by noted effects house Industrial Light & Magic (ILM) during the production of the special and visual effects work which brings to life Vigo the Carpathian (Wilhelm von Homburg). This lifecast was taken from the actor as the effects crew calculated the use of prosthetic appliances and was also used in test footage where Vigo is seen emerging from the painting which was achieved with a sheet of rubber on to which the painting was projected and the lifecast used to push through the rubber bringing the image to life, the behind the scenes photograph presented here shows ILM creature and make-up effects designer Tim Lawrence and assistant Howie Weed experimenting with this process.

The lifecast is constructed from black fibreglass which has been filled with high density foam and features an eye to the rear allowing the cast to be wall mounted, it measures approximately 10" x 6.5" x 4.5" and remains in excellent production used condition, extremely fine. Obtained from the collection of ILM creature and make-up effects designer Tim Lawrence.

A rare and highly displayable artefact from this classic franchise.