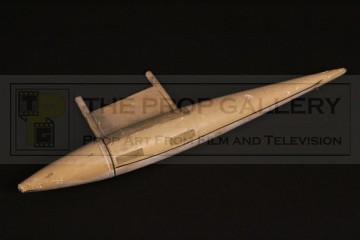 An original miniature used in the production of Joe 90, the 1968 supermarionation television series created by Gerry and Sylvia Anderson of Thunderbirds fame.

This fuel tank was built by the Century 21 model effects team and used in the episode Attack of the Tiger in which Joe takes on the brain patterns of an expert pilot to destroy a nuclear rocket complex. To do this Joe will pilot the VG104 bomber which is modified at the request of Sam Loover, one of the modifications is to add extra fuel tanks to the bomber, this is one of those fuel tanks which was used on the large scale VG104 filming miniature.

The fuel tank is hand carved in jelutong wood, hand painted and weathered it also features panel lines achieved in pen and automotive detailing tape, both common features of original Century 21 miniatures. One end of the tank has a small nail which would have been used to rig the miniature during filming.

The fuel tank measures an impressive 10" long and approximately 3.5" at its widest point, it remains in excellent screen used condition with some age related wear as you would expect.