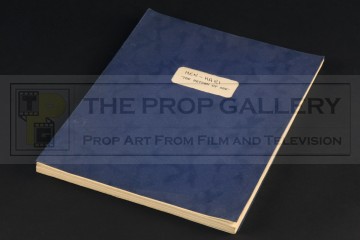 Vengeance of She (The)

An original script used in the production of The Vengeance of She, the 1968 fantasy picture produced by Hammer Film Productions.

This original production used script comprises of 100 pages bound between front and rear covers of dark blue card with the front featuring a window cut out revealing the title of the movie to the interior cover page which is dated 24th May 1967. This script was issued during the production to noted actor Peter Wyngarde who was considered for a role in the movie hence the title page being hand inscribed 'MEN-HARI', a role which would later go to Derek Godfrey.

An incredibly rare example of original production material from this Hammer Films sequel.