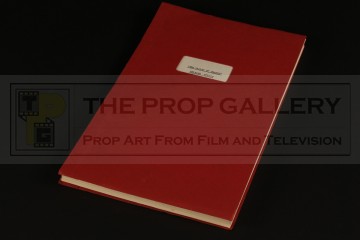 Valley of Gwangi (The)

An original release script from the production of The Valley of Gwangi, the 1969 fantasy adventure picture produced by Ray Harryhausen.

This original production release script is dated April 1969 and comprises of 135 pages bound between front and rear covers of red card with the front featuring a window revealing the title of the movie to the interior cover page. The content of the script is broken down in to ten reels with highly detailed descriptions of the action taking place to the centre of each page with the sound, to include dialogue and any sound effects, to the right.

The script remains in remarkable vintage condition with minimal wear, exceptionally fine throughout.

An extremely rare example of original production material from this classic Harryhausen picture.