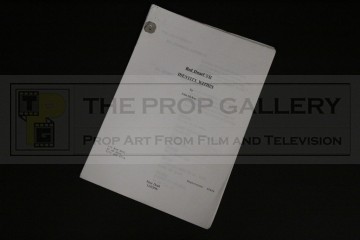 An original script for the 'lost' episode used in the production of the BBC science fiction comedy series Red Dwarf.

This script is for the proposed series VII episode Identity Within was written by John McKay and was originally slated as the second story of the series which became Stoke Me a Clipper and ultimately replaced by Duct Soup, despite being scripted and storyboards produced it was considered too ambitious and the sets required for filming too costly to produce thus becoming the 'lost' episode.

The script deals with Cat and the fact he is still a virgin having never met another of his own race, he falls ill and Kryten discovers he may die if he doesn't reproduce soon, common for a Felis Sapien. The crew decide that they owe it to Cat to save his life by arranging for one of his own kind to mate with him.

The script is dated 11/03/96 and consists of 58 pages in addition to the front cover bound by original pin to the top left, it remains in excellent condition throughout with any visual effects requirements having been highlighted in orange as this particular script was issued to a member of the BBC Visual Effects Department. Script rewrites were done by Kim Fuller but this original first draft represents McKay's original storyline in its entirety.

A reconstructed version of this was released as a DVD extra using new storyboards and performed by Chris Barrie, this however remains an incredibly rare example of a complete and original production used script for this lost episode.

A rare and interesting production artefact from this cult television series.