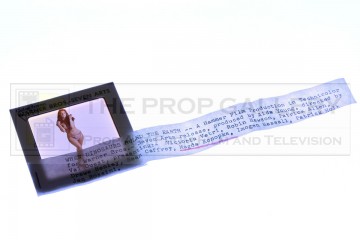 When Dinosaurs Ruled the Earth

An original transparency from the production of When Dinosaurs Ruled the Earth, the 1970 Hammer Films production starring Victoria Vetri.

This is a vintage original 2" x 2" medium format positive colour studio transparency featuring a publicity shot of a bikini clad Magda Konopka as Ulido. The transparency is mounted in its original cardboard frame which features the details of Warner Bros. who acted as distributers, stapled to this is an original snipe which offers details about the production with Konopka's name underlined in red pen.

The overall measurement of the transparency is 2.75" x 2.75" with the paper snipe extending over 8", it remains in excellent vintage condition exhibiting some minor colour shift with folds to snipe, generally fine.

A rare and fine example of original material from this Academy Award nominated production.