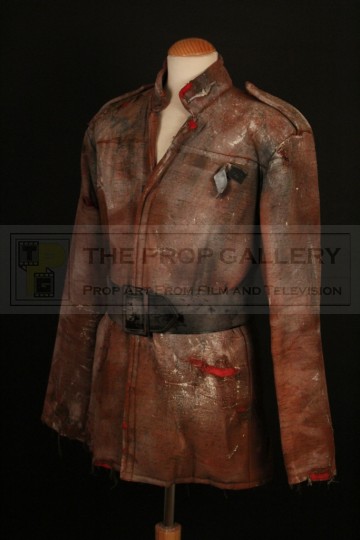 From the 1979 serial Destiny of the Daleks starring Tom Baker as The Doctor this is the original costume worn on screen by Tim Barlow as Tyssan. This jacket was custom made by the BBC Wardrobe Department and features a velcro front with metal insignia to the collar and has been heavily distressed to include rips, tears and paint weathering. The costume is lined to the interior and features an adhesive label to the collar area which is hand inscribed 'BBC' in pen. The jacket is accompanied by the original belt which is constructed from PVC and is paint weathered to appear well used, this is again hand inscribed 'BBC' to the back. Both the jacket and belt are believed to be unique and can be screen matched to every scene in which Tyssan appears indicating they were the only ones made for the serial.

The jacket remains in generally excellent production used and distressed condition with some of the interior padding having turned to dust due to age. This is not uncommon with BBC wardrobe of the period and does not detract from what is a fine example of original principal character costume from this long running science fiction series.