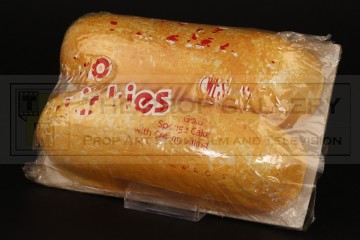 This prop Twinkie packet were custom made by the production and are constructed from foam, these a piece of thick card with cellophane wrapping featuring various branding and a Walt Disney Studios Property Dept sticker with barcode to the base.

The Twinkies measure approximately 8" x 5" and remain in good condition with some wear to the wrapping and loss of lettering transfers, foam element supple, overall fine.

A displayable artefact from this popular and memorable series.