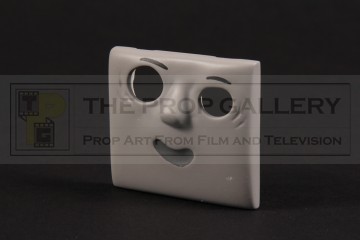 This is one of the original face appliances for a Troublesome Truck, the mischievous rolling stock who like to play tricks on the engines and appear throughout the series. Constructed from high quality resin the face features a grey finish with hand painted eyebrows and mouth, it is hand inscribed to the rear 'TRUCKS CLOSED, GROUP 2' with the letter C and accompanied by its original production bag which is similarly inscribed in marker pen.