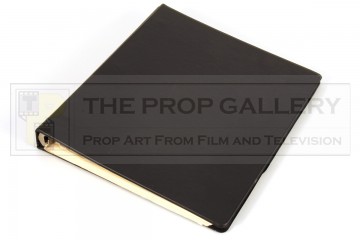 An original script used in the production of Tron, the 1982 science fiction adventure picture directed by Steven Lisberger and produced by Walt Disney.

This original first draft script is dated January 26, 1981 and comprises of 110 pages housed in a black ring binder. The cover page features a list of requirements needed to complete this early version of the script which includes the addition of further language relating to computers, development of the Sark/Dillinger character and a 'general polish'. This script features a differing version of the noted deleted love scene between Tron (Bruce Boxleitner) and Yori (Cindy Morgan) which takes place in her apartment and features use of highlighter pen by a crew member throughout the first half.

A fine example of original production material from this pioneering classic of the science fiction genre.