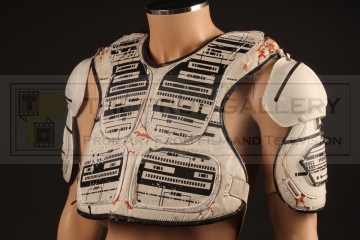 An original costume used in the production of Tron, the 1982 science fiction adventure picture directed by Steven Lisberger and produced by Walt Disney.

The visuals of Tron are today considered groundbreaking, the combination of state of the art computer generated imagery with animation enhanced live action created a hugely innovative look which remains impressive and unique to this day. The glowing circuitry on the costumes was created by an incredibly time consuming and complex back lit animation process which was used to add colour to the black and white footage, this was achieved by painting a series of holdout mattes to isolate specific areas of each frame and bringing them to life on an animation stand using back lighting and colour filters.

The unique costumes were visioned by noted conceptual designers Jean Giraud, better known as Moebuis, and Syd Mead with these ideas expanded on by Elois Jenssen and Rosanna Norton who were nominated for the Academy Award for Best Costume design, although overlooked at the time in the category of visual effects the advancements made by the production would be recognised some years later in the form of an Academy Award for Technical Achievement which was presented to Ken Perlin.

This body armour is based on a period protective armour intended for use in sports such as hockey and is constructed from hard plastic panels with foam padded orange material. The outer material of the costume piece is painted white with the panels to the chest detailed with complex circuitry designs printed in black and white and pasted on to the plastic, further detail is achieved with hand applied black tape. The armour features a Velcro strap used to secure the costume around the neck with other elastic straps to be worn around the waist and upper arms, the circuitry patterns to these being hand drawn in marker pen where the use of tape was impractical.

The costume remains in good vintage and untouched production used condition exhibiting some paint loss and corner lifting to the printed circuitry designs and lacking some of the hand applied tape detail which has peeled off in the years since the production. Accompanied by a certificate of authenticity from The Walt Disney Company.

This represents an incredibly rare and instantly recognisable artefact from this groundbreaking cult classic of the science fiction genre.