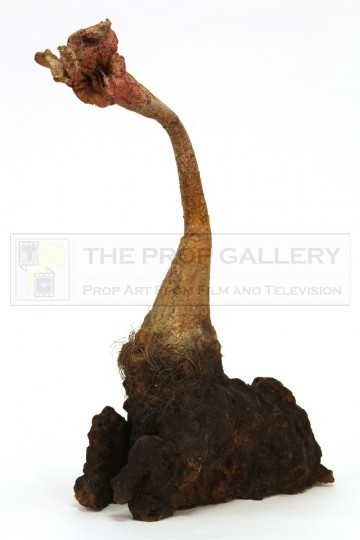 Day of the Triffids (The)

An original prop used in the production of The Day of the Triffids, the 1981 BBC adaptation of John Wyndham's classic science fiction novel.

The Triffids were bought to life on screen by both full size and miniature plants created by the BBC Visual Effects Department from a design by Steve Drewett who used his experience from the Natural History Museum basing the design on real parasitic plants. Eight full size props were constructed from fibreglass with a go-kart seat to the interior of a large latex root which concealed the operator, these stood over nine feet with the only known surviving example forming part of The Prop Gallery's company collection, the shot of the Triffid farm was achieved in miniature with a number of plants created from the original maquette created by effects designer Steve Drewett.

This miniature is an original made from the aforementioned maquette and used in the farm scene, the base is constructed from soft painted foam with a stem of foam latex featuring a wire to the interior allowing it to be posed. The miniature stands approximately 15" high and remains in good production used condition with some loss of finish to the stem, lacking the clackers and stinger with some hardening to the flower and upper stem but overall extremely stable. This miniature was obtained by The Prop Gallery directly from actress Emma Relph who portrayed Josella Payton and retained it as a memento following filming.

This represents an extremely rare and highly displayable artefact from this cult BBC adaptation which requires no introduction.