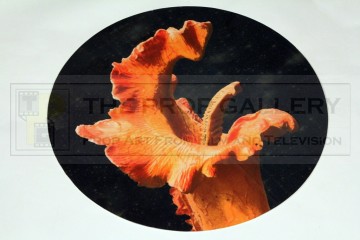 Brian Pern: A Life in Rock

An original prop used in the production of the 2014 comedy spoof rockumentary series Brian Pern: A Life in Rock starring Simon Day in the title role.

This drum skin was used in the second episode of series two in which ageing rocker Brian Pern (Simon Day) presents his musical version of The Day of the Triffids. This Triffid themed drum skin can be seen on the bass drum played by comedian Al Murray in his role as drummer Eddie Mount, these scenes were filmed at Wembley Arena in London on September 23rd 2014.

Constructed from plastic board with applied sticker featuring a photo enlargement of a Triffid head, the drum skin still has white tack to the verso where it was attached to the drum during filming.

The drum skin measures approximately 22" in diameter and remains in good screen used condition with some minor edge wear.