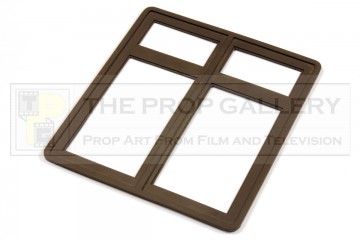 An original miniature from the production of Titanic, the 1997 disaster epic starring Leonardo DiCaprio and Kate Winslet under the direction of James Cameron.

This window was custom made by Donald Pennington Inc who were tasked with constructing the large scale miniatures of the Titanic ship. The approximately 1:6 miniature window frame is in scale with the bridge to bow section and is constructed from resin with a brown paint finish.

An affordable and displayable miniature artefact from this acclaimed Academy Award winning masterpiece which on its release became the highest grossing picture of all time.