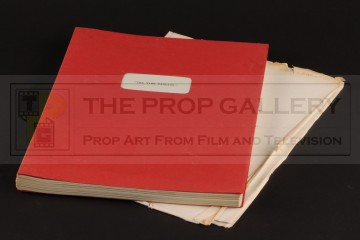 An original script used in the production of Time Bandits, the 1981 fantasy picture directed by Terry Gilliam.

This original production used script is dated April 1st 1980 and comprises of 126 light green pages in addition to the cover page bound within front and rear covers of red card. The front cover of the script features a window cut out revealing the title of the movie 'THE TIME BANDITS' printed to the interior cover page with this being hand inscribed 'VAL' for model maker Val Charlton to whom this script was issued to during the production. The script is accompanied by 22 loose amendment pages which are dated 14.4.80 with the front page of these again being hand inscribed 'VAL CHARLTON' in faded black pen.

The script remains in excellent production used condition and is extremely fine throughout with only very minor toning, the amendment pages exhibiting more edge wear most notable to the front and rear pages with the remainder in fine condition.

An extremely rare example of original production material from this highly regarded picture.