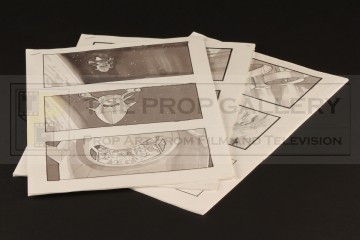 Original artwork from the production of Thunderbirds, the 2004 live action remake of the classic 1960's Gerry Anderson science fiction television series of the same name.

This hand drawn storyboard artwork was created during the very early stages of production circa 1997 when months of pre-production work was completed including script writing, conceptual designs of the craft and storyboarding. Following this the project was shelved for several years until late 2002 when a new script was penned and the project was realised with the eventual 2004 release. These three storyboard sequences feature a total of 77 high quality hand drawn illustrations measuring approximately 6.5" x 3" and spanning 27 A4 pages. Accomplished in pen and ink with some hand inscribed with various scene numbers they largely depict close ups of the crew and various craft to be featured in the movie, they are believed to be previously unseen and unpublished.