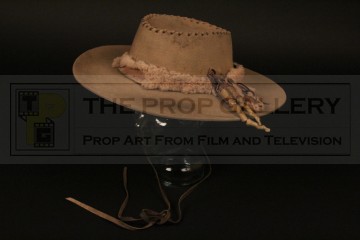 Mask of Zorro (The)

An original hat used in the production of The Mask of Zorro starring Antonio Banderas, Anthony Hopkins and Catherine Zeta-Jones.

This custom made hat was worn on screen by L.Q. Jones as Three Fingered Jack. The hat is beautifully constructed in felt and features a sheepskin band with Jack's two missing fingers attached which are constructed from resin. There is a foam band to the interior which has two labels, one reads 'Jack' with the other illegible.

The hat measures an impressive 16" across the brim and approximately 5" to the top of the crown, it remains in fine screen used condition with some minor soiling from production use. Very fine.

A highly displayable artefact from this swashbuckling blockbuster.