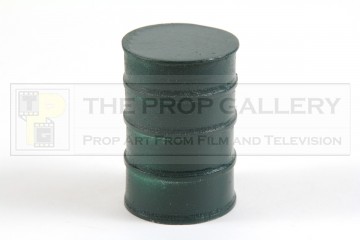 Miniature barrels can be seen through the series used at set drssing and loads, this miniature was constructed for use in later series during the HiT era an is moulded in resin with a green paint finish. The miniature stands 2.5" high and remains in excellent production used condition, very fine.

An affordable artefact from this popular children's television series.