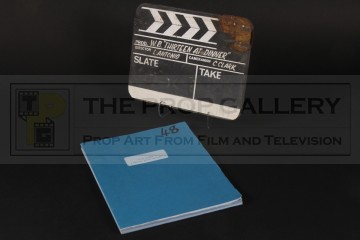 An original clapperboard and script used in the production of Thirteen at Dinner, the 1985 mystery picture starring Peter Ustinov as Hercule Poirot.

This original production used traditional style black wooden clapperboard with hinged clap stick bears the title of the movie 'THIRTEEN AT DINNER' in addition to the names of director Lou Antonio and cinematographer Curtis Clark. The clapperboard has spaces where the slate and take number could be marked for reference and exhibits some signs of chalk residue from use during filming and retains the date26th February 1985 from its last use during filming. This is accompanied by an original production used revised draft script dated 2/18/15, this comprising 92 blue pages bound between front and rear covers of blue card with the front hand inscribed with the number 48 in marker pen.

The clapperboard measures approximately 10" x 8" and remains in very good condition exhibiting surface wear consistent with use during the production and rusting to the hinge, the accompanying script remains in excellent production used condition with only minor edge wear, very fine.

A rare example of original production material from this well received picture.