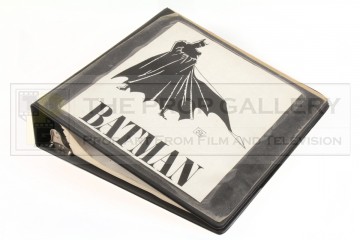 An original script used in the production of Batman, Tim Burton's 1989 superhero blockbuster starring Michael Keaton as the caped crusader opposite Jack Nicholson in his unforgettable portrayal of The Joker.

This third draft screenplay is dated February 29, 1988 and comprises of 247 pages presented in a vintage black binder which features a copy of artwork drawn by Batman co-creator Bob Kane, this applied with adhesive plastic. This being an early draft it includes a number of sequences which differ significantly from the final film, these differences include, but are not limited to, the following

The binder measures approximately 11.5" x 11.5" and remains in very good vintage condition with the script exhibiting some age related toning to the edges and the plastic covering to the front of the binder peeling at the edges, where this was tripped at the top the internal carboard of the binder is visible, otherwise fine.

A rare and interesting example of original production material from this Academy Award winning superhero classic.