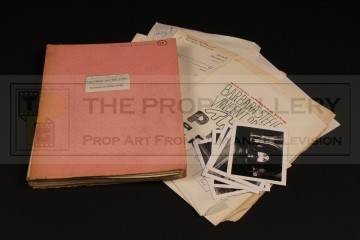 Virgin and the Gypsy (The)

An original script used in the production of The Virgin and the Gypsy, the 1970 drama directed by Christopher Miles.

This original production used script comprises of 151 pages bound between front and rear covers of pink card with the front featuring a window cut out revealing the title of the movie to the interior cover page which is hand inscribed with the name of assistant director Derek Whitehurst who used this script during the production. The script features extensive annotations throughout which are inscribed in Whitehurst's hand and is accompanied by a wealth of production paperwork to include cast list, unit list, casting advice, a production memo and associated vintage newspaper clippings. In addition to this is an envelope post marked December 15 1969 containing a number of photographs and a note from director Christopher Miles and thanking Whitehurst for his efforts and offering festive wishes.

The script remains in excellent production used condition with some light wear from use and handling with the accompanying paperwork in varying conditions, generally good to excellent with minor wear.

An exceptionally rare and concise collection of original production material from the production.