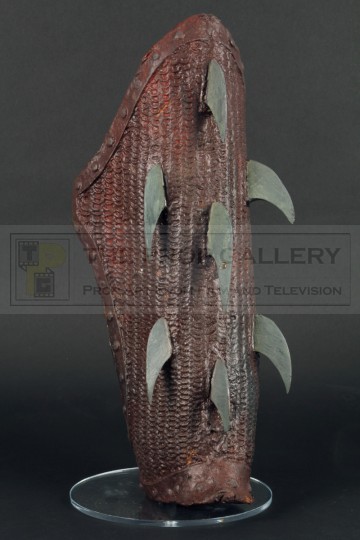 Teenage Mutant Ninja Turtles II: The Secret of the Ooze

An original costume element used in the production of Teenage Mutant Ninja Turtles II: The Secret of the Ooze, the 1991 superhero comedy sequel directed by Michael Pressman.

This is one of the original greaves worn by François Chau as The Shedder throughout the movie. Constructed from thick rubber the leg armour is finished in brown and green paint and features a number of spikes to the front with a neoprene lining to the interior. Velcro straps and fastenings are present to the rear which were used to attach the piece to the actors leg.

The armour measures approximately 17" long and remains in excellent production used condition with no deterioration, lacking some of the spike tips and exhibiting some minor paint wear.

A rare and highly displayable example of principal character wardrobe from this popular franchise.