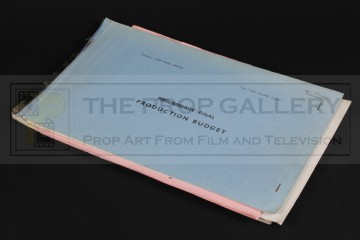 An original document used in the production of The Ruling Class, the 1972 black comedy starring Peter O'Toole.

This is the original final budget for the production comprising of 32 pages bound between front and rear covers of blue card with the front featuring the name of the movie and production company, this further inscribed 'W. FINCH' for production accountant William Finch. To the interior cover of the budget is a final statement of production costs detailing the final figures spent subject to certification, the first interior page of the budget is dated March 25, 1971 and signed by associate producer David Korda includes estimated filming dates with the remainder of the budget broken down in to various categories with figures for each expense noted, these covering every aspect of the production and totalling $1.5 million, there are a large number of annotations throughout the budget, to most pages, these hand inscribed in pen. This is accompanied by further production paperwork to include a unit list on pink paper totalling 9 staple bound pages and a studio agreement detailing the hiring of facilities and equipment totalling 17 pages.

An extremely rare and interesting example of original production material from this Academy Award nominated production.