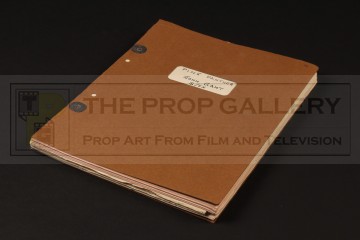 Return of the Pink Panther (The)

An original script used in the production of the 1975 picture The Return of the Pink Panther starring Peter Sellers.

This original production used revised draft script is dated 11 June 1974 and consists of approximately 110 pages bound between front and rear covers of brown card with the front featuring a window cut out showing through to the cover page which is hand inscribed 'PINK PANTHER' and 'JOHN GANT SFX' in black pen. The interior of the script features revisions on pink and white pages with a significant section having been completely revised, there are some minor hand inscribed annotations to two of the pages, tucked in the rear of the script are four petty cash vouchers from the time of production.

The script remains in excellent production used condition throughout with some light edge wear, overall fine.