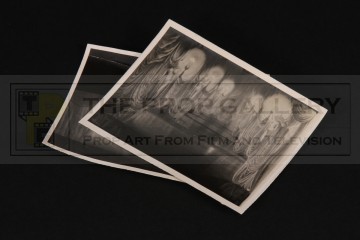 A pair of original photographs from the production of The Tales of Hoffmann, the 1951 picture produced and directed by Michael Powell and Emeric Pressburger.

These two vintage original photographs originated from the Technicolor laboratory in West Drayton, London which was located in close proximity to the major British studios, it was here where these shots were processed. The photographs offer us a comparison between the raw live action footage and the final shot following the addition of the matte, in this shot from the ballet sequence the lights and the top of the drapes added via the matte painting which was likely the work of Ivor Beddoes and Joseph Natanson assisted by Les Bowie and Judy Jordan at Shepperton Studios.

The photographs each measure approximately 4.75" x 3.5" and remain in very good vintage condition exhibiting some toning with one displaying a significant crease, paper remnants present following past removal from an album, otherwise fine.

An exceptionally rare and very likely unique example of original production material from this highly regarded picture which was the recipient of the Academy Award for Best Art Direction.