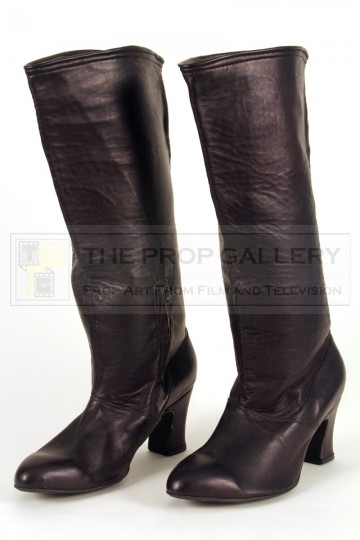 The Rani (Kate O'Mara) boots - Mark of the Rani

An original costume element from the production of the long running BBC television series Doctor Who.

These boots were obtained by the BBC Wardrobe Department for use by Kate O'Mara as The Rani in the 1985 serial The Mark of the Rani starring Colin Baker as The Doctor. Constructed from black leather the boots differ slightly from those ultimately worn by O'Mara on screen with the main difference being the length of the zip but it has been confirmed by The Prop Gallery that these were obtained from an official BBC Wardrobe sale via Bonhams, London in the early 1990s and were accompanied by a pair of screen used boots, furthermore both pairs of boots are the same brand with matching soles.

The boots stand approximately 17" high and remain in excellent vintage and unused condition having never been worn, some information sanded from the base, likely branding, which is common on film and television productions. Very fine.

An affordable example of principal character wardrobe from this cult science fiction series.