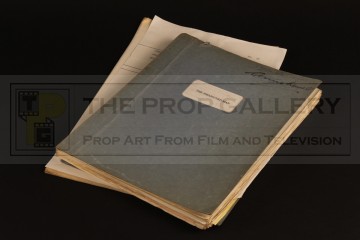 An original script used in the production of The Projected Man, the 1966 science fiction picture directed by Ian Curteis.

This original production used script comprises of 110 pages bound between front and rear covers of blue card with the front featuring a window cut out showing through to the title page and the top right corner inscribed with the name of assistant director Derek Whitehurst who utilised this script during the production. The script features a large quantity of multicoloured revision pages throughout with numerous alterations and hand inscribed annotations in Whitehurst's hand. The script is accompanied by an original call sheet dated 16th December 1965 and a 16 page staple bound breakdown detailing the characters and props required for each scene.

The script remains in very good production used condition with edge and cover wear from use and handing, accompanying documents fine with some discolouration and age related toning.