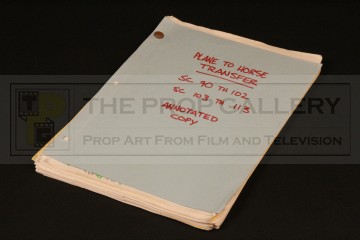 An original storyboard sequence used in the production of The Phantom, the 1996 superhero picture starring Billy Zane in the title role.

This storyboard sequence covers the memorable scene where The Phantom (Billy Zane) and Diana Palmer (Kirsty Swanson) jump from the plane on to horseback. This complicated sequence was realised by the second unit and involved many different takes from various angles, cuts and special effects techniques in order to be bought to life on screen. These storyboards were used by noted second unit director Michael Moore during filming and feature numerous hand inscribed annotations throughout.

The sequence consists of approximately 90 storyboards including some yellow revisions which are bound by a brass split pin between front and rear covers of blue card, the front being hand inscribed in red marker pen 'PLANE TO HORSE TRANSFER' and 'ANNOTATED COPY' in addition to the relevant scene numbers. The vast majority of the storyboards feature some kind of hand inscribed annotations, some are very heavily inscribed with many featuring different colours of highlighter and notes relating to the action, a number of storyboards also feature hand drawn pencil diagrams to the verso. To the front of the sequence are two camera diagrams, the first of which is heavily annotated with Moore's notes.

The storyboard sequence remains in excellent condition with some light edge wear from heavy use during the production, overall very fine.

A fine example of original production material which clearly saw extensive use during filming.