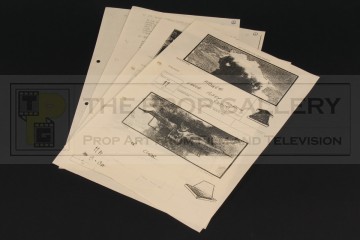 A pair of original storyboards used in the production of The NeverEnding Story, the 1984 fantasy epic directed by Wolfgang Petersen.

These storyboards were utilised during the production by Academy Award winning special effects artist Brian Johnson as he filmed the cloud plates with the flying unit from a Clay Lacy learjet equipped with Apogee and Continental cameras, these cloud plates were then composited with the live action footage to produce the final sequence.

The two storyboards are headed with the German title of the movie 'DIE UNENDLICHE GESCHICHTE' and each feature two printed illustrations relating to the sequence featuring Night Hob and his bat transportation with notes relating to the shots, these are accompanied by original corresponding pages from the screenplay which describe the sequence in detail, these pages being hand inscribed with numbers to the top right corner. Obtained by The Prop Gallery directly from the collection of special effects director Brian Johnson.

A fine example of original production material from this fantasy classic.