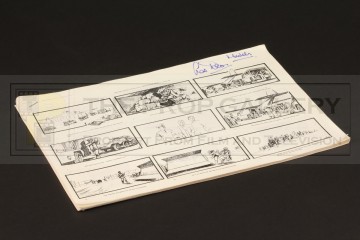 An original storyboard sequence used in the production of the 1987 James Bond picture The Living Daylights starring Timothy Dalton as the suave spy.

This sequence of production used storyboard copies covers the memorable scenes where Bond loads a bomb on to the cargo plane and flying off with Kara (Maryam d'Abo) before throwing Necros (Andreas Wisniewski) to his death after a struggle and bailing before the plane crashes. The 28 page storyboard sequence is bound by a staple to the top corner and is headed 'THE LIVING DAYLIGHTS (tentative title) RUSSIAN AEROPLANE SEQUENCE', with the date 23 May 1986. A number of the subsequent pages are revised with some bearing the dates 21 July 1986 and 4 August 1986, the front page bears the signature of visual effects department model photographer Leslie Dear to the top right corner who used this set during the production and is further inscribed 'MODELS'.

The storyboard sequence measures approximately 12" x 8.5" and remains in excellent complete condition exhibiting some edge and corner wear with the final page present but detached from the staple, overall fine.

A fine storyboard sequence from one of the most celebrated franchises in cinematic history.