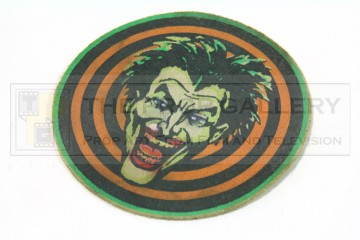 An original patch used in the production of Batman, Tim Burton's 1989 superhero blockbuster starring Michael Keaton as the caped crusader opposite Jack Nicholson in his unforgettable portrayal of The Joker.

Patches such as this can be seen used on the hats worn by The Joker's (Jack Nicholson) helicopter pilot goons as he arrives in Gotham City before the parade and later in the climactic sequence as they attempt to rescue him. Custom printed by the production on material the multicoloured patch features the instantly recognisable Joker emblem and exhibits minor traces of adhesive to the verso from being stuck to the hat during filming.