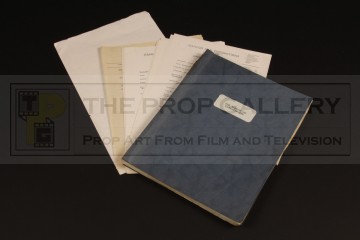 Horror of Frankenstein (The)

An original script used in the production of The Horror of Frankenstein, the 1970 picture produced by Hammer Films and remake of the 1957 classic The Curse of Frankenstein.

This original production used script comprises of 124 pages bound between front and rear covers of blue card with the front featuring a window cut out revealing the title of the movie to the interior cover page which is hand inscribed with the name of assistant director Derek Whitehurst who used this script during the production. The script features extensive annotations throughout which are inscribed in Whitehurst's hand and some amendment pages which are dated 27.2.70. This is accompanied by a collection of twenty artists contracts which are headed 'HAMMER FILM PRODUCTIONS' and contain the particulars for all the principal cast members including addresses, screen credit and salary details, each is ticked next to first director on the staff list to the top left corner indicating they were issued to Derek. Also included is a list of telephone numbers for production staff and a invite to a party on 29th April 1970 which is hand inscribed to 'DEREK WHITEHURST ESQ'

A exceptionally rare collection of original production material from this Hammer Films classic.